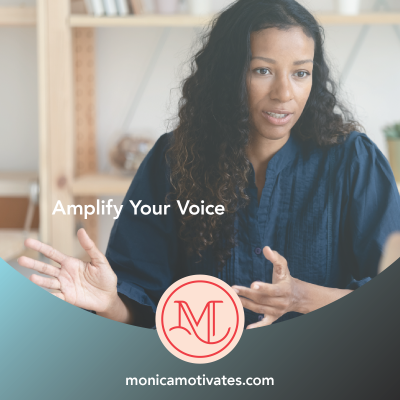 From dealing with interruptions to having others take credit for your ideas or assume you are not the one in charge, gender bias is deeply ingrained and men and women alike tend to associate authority and expertise with men.

We sometimes make light of the experience with cleverly coined terms such as “mansplaining” where men spell out the obvious for women or “hepeat” where a man takes credit for an idea already raised by a woman but ignored. But the issues are real and research shows that men interrupt women far more often than they do other men. Even when women interrupt others, they are three times more likely to interrupt another woman.

But there are ways to raise your voice effectively on your own and with women working together to amplify one another.

Rosalind Brewer, the new CEO of Walgreens and former COO of Starbucks, had a key message when she addressed graduates at her all-female alma mater, Spelman College. She said, “stay steadfast” and “keep using your voice.”

Brewer is the only Black woman currently serving as a Fortune 500 CEO and only the third Black woman in history to do so. Thasunda Brown Duckett will become the second Black female Fortune 500 CEO when she takes the helm at TIAA, an investment company, in May.  “When you’re a Black woman, you get mistaken a lot,” Brewer says. “You get mistaken as someone who could actually not have that top job. Sometimes you’re mistaken for kitchen help. Sometimes people assume you’re in the wrong place.”

Senior women working in the Obama administration are credited with formalizing a technique of women working together to raise their voices. Frustrated by seeing male peers garner more attention in meetings and their ideas get legs more quickly, they launched an echoing and supporting technique they dubbed “amplification.”

The idea is simple and powerful. When a woman makes an important point or suggestion and it’s either ignored or immediately shot down, other women at the table repeat the first person’s idea, giving clear support and credit to its author and returning attention to the concept. You can apply the same principles in your work and with your female co-founders and colleagues.

Repeating and supporting someone else’s idea can give it more weight, as can highlighting her expertise. Women can do this for one another in a meeting with a bank, in presentations to investors, in brainstorming sessions with staff members and in negotiations. You might say something like, “What Linda said is critical. Our presence in this market segment is growing rapidly and her research shows we can expect that growth to accelerate this year.” You immediately put the spotlight back on Linda’s contribution.

Being interrupted, talked over, shut down or penalized for speaking out is something nearly every woman has experienced, especially in situations where they are outnumbered by men, a common occurrence in business, leadership and the start-up space. In addition to working with other women to amplify your own and their voices, consider these ideas fellow founders shared on Women/Entrepreneur on how they make themselves heard.

Finally, remember the advice Brewer shares most often with women on the rise. “Use your voice.” As she told the young female graduates at Spelman, “Sometimes we use our voices by saying, ‘We belong here, get used to us.’”