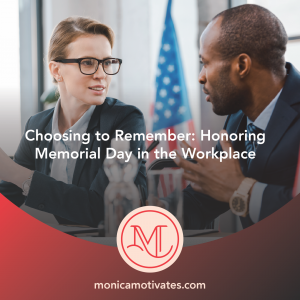 It can be tricky to recognize any holiday in the workplace, with many tied to specific religious practices or cultures. But what you choose to recognize, how you mark such moments and who is involved can also offer opportunities to convey important organization values and build a more inclusive culture.

How we commemorate our shared history plays an important role in every culture as such observances speak to what a society values and help current generations learn about the sacrifices of those who came before them. Unfortunately, over time, many important observances lose much of their original meaning and become synonymous with a day off, or even sales that urge you to spend such moments shopping.

When you revisit the original purpose of many so-called holidays and explore a wider range of celebrations that might be meaningful to your diverse stakeholders, the result can be stronger appreciation for our shared and diverse histories and current experiences.

A day to remember what exactly?

While many Americans connect Memorial Day to the general honoring of all those who have died in wars fought by the United States, it was started specifically to honor soldiers killed during the Civil War. Originally called Decoration Day, it was officially first observed on May 30, 1868 when 5,000 volunteers decorated the graves of more than 20,000 Union and Confederate soldiers buried at Arlington National Cemetery.

However, Yale University Professor of American History, Director of the University’s Center for the Study of Slavery, Resistance, and Abolition, and Pulitzer Prize winner, David Blight, Ph.D., discovered in 1996 through handwritten notes from Union soldiers that men and women just freed from enslavement were actually the first to mark the day.

In 1865 in Charleston, South Carolina, formerly enslaved people exhumed the bodies of fallen Union soldiers from a mass grave and reinterred them with proper burial in a new cemetery. This was followed on May 1, 1865 by a parade around a former race track where the fallen had been held captive. According to Blight’s research, 10,000 people attended, mostly formerly enslaved people and some white missionaries. Black ministers recited Bible verses and several Black Union regiments performed double-time marches.

Choosing to recognize Memorial Day today can, when done with respect for a broad range of backgrounds, traditions and viewpoints, provide a meaningful shared experience and help team members recognize benefits they enjoy due to the contributions of others. The key is to gain broad input, recognize universal themes and focus on dignity and gratitude rather than hype.

Consider these thoughts to mark the day in your workplace.

Just as there are many ways to express your appreciation, there are some activities to avoid. That includes phrasing such as “Happy Memorial Day,” since, of course, it’s a day of somber remembrance for those who lost their lives during the Civil War and others that followed. Another misstep is simply forgetting about our country’s fallen warriors altogether.

A particularly effective way to mark Memorial Day is by doing exactly what the name suggests; remembering. Stopping to acknowledge that this day is set aside for much more than car sales and picnics, you, your colleagues and your business can honor the many Americans who have died while serving in the U.S. military. And while our focus is often elsewhere, that includes the 13 men and women, according to Military Times, who died just last year in the nation’s withdrawal from Afghanistan — every one of them precious to those left behind.