Did He Really Just Say That?

Did He Really Just Say That?

Celebrate Women’s History Month
Did He Really Just Say That? 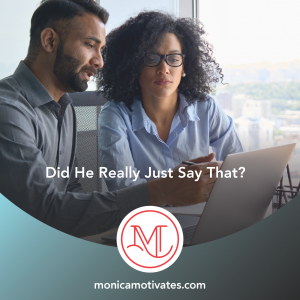 Women-owned businesses have grown from less than five percent to more than 42 percent in the last fifty years and today one in every five C-Suite leaders is a woman. While not enough, that’s progress. But sexism still exists in many workplaces and knowing how to deal with it is a critical competency most women still need.

There’s the well-intended question from a colleague who asks if you will return to work after the baby. The senior leader who focuses too much on how nice you look. The boss who explains he didn’t consider you for an overseas assignment because you have a family. Or even the direct report who talks over you in a meeting. Thinking ahead to how to respond to sexist comments or behaviors (even when unintended) can help shut them down and position you as confident, in control and ready to address tough issues firmly and rationally.

Too common, too familiar

The Everyday Sexism Project collects stories from real women to document that the issue still exists and that countering it should not label you as militant. Many of the most common sexist scenarios they catalog are likely familiar to most women.

They include senior female leaders being mistaken for administrative assistants and asked for coffee. Having your ideas ignored until stated by a man. Or there’s the implied idea that, if you have a family, you will be less ambitious, not be able to travel and will be unreliable due to childcare issues. Working fathers somehow don’t get asked those questions.

Even women running their own businesses are not immune to clients who address remarks to male team members, question your expertise in a male-dominated field or consider your business proposals less seriously.

Formal complaints can, unfortunately, often lead to unwanted consequences. Many women report a chilling effect where they are marginalized or blatantly shut out of projects, passed over for promotion, demoted or even fired. That likely explains why, even among women who experience sexual harassment, only one in five makes a formal complaint. That is unacceptable and providing support for women, as well as continuing to push for greater gender equity in the workplace, are both critical to changing the dynamic. In the meantime, every woman needs tools to address sexism that can catch you off guard and diminish your confidence and credibility.

When you see/hear/experience something, say something

Reality on the ground is that, sometimes, we look the other way, but you can only do that to a point. When the offense is serious or threatens your credibility, you have to speak up.

Especially in serious situations involving actual sexual harassment, experts agree you need to act. The first step is to calmly and clearly tell the individual that their behavior is not welcome and needs to stop. The less you label or threaten, the more likely the message will get through. You can say something as simple as, “Stop. This is making me uncomfortable,” and then remove yourself from the situation. It is also a good idea to confide in someone you trust, perhaps outside of the workplace, so that your experience can be validated. Many women actually doubt their own read of such advances even though in their gut they know.

For more “everyday” sexism, an arsenal of ready responses is a great tool to help you quickly recover in ways that empower, make clear where you stand without escalating discomfort and lessen the time you invest in ruminating over such remarks.

What do you mean? This is one of my favorite questions to put the ball back into the offender’s court and force him to confront his remark. It also buys you time to collect your thoughts. This can work in a broad range of situations from, “How can you be away from home for two weeks?” to “You’re going to get a lot of attention in that outfit,” to “I’ll take the lead on this,” or “Do you really want to take on an operations position?” The beauty of this response is that it makes someone actually say the thing he’s only been willing to allude to, and it doesn’t place you in an immediately combative position.

Name it. Men sometimes commit “benevolent” sexism in calling attention to gender out of notions like an old-fashioned idea of being a gentleman. They might apologize to the “ladies in the room” when they use foul language or compliment you for “keeping the boys on track.” You might counter with, “Thank you, but I’m just an adult member of the team, like everyone else here.” If that feels too harsh, you can go to the person later and explain that such comments suggest you are somehow less capable than others.

Counter with relevant facts. If someone explains your accomplishment as resting on your gender, there are subtle ways to get them back on track. For example, women are sometimes overly praised for organizational skills with comments that refer to being the “office mom” or, “Thank heaven there’s a woman here to make us look good.” An effective response will take the focus off gender and onto capabilities. You might say, “I think what actually made the difference here is that I was able to show the client where we helped them drive new revenue and cut costs.”

Have a private conversation. As long as you are comfortable being alone with the person, talking with them privately might help them be more receptive to feedback. For those making dumb jokes, you might say, “I’m not sure you realize you’re even doing this, but it makes me feel uncomfortable when you say . . .”

As women increase their ranks as senior leaders and business owners, we have a growing opportunity to influence behavior and culture. You can help usher in a new day by handling sexist comments and behaviors with a strong leadership presence and presence of mind.