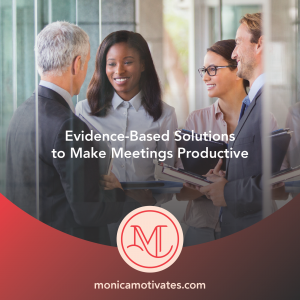 If you attended a meeting today, you’re in good company. In the U.S. alone, 55 million others did as well. Too bad the research shows about 25% of that time is spent on irrelevant issues and nine out of 10 workers are daydreaming while sitting there.

Contemporary research is flipping many of the ideas we have about how to run an effective meeting on their heads. Consider, for example, the meeting agenda. Who could argue against it? The author of The Surprising Science of Meetings, Professor of Organizational Science at the University of North Carolina at Charlotte, Steven Rogelberg, Ph.D., does. He says that an agenda itself actually doesn’t correlate with increased meeting effectiveness. There are things that do, though, and the leader’s mindset is a big one.

Rogelberg has found that people who take on a “steward mindset,” shift their perspective on meetings. Those who see themselves as stewards of other people’s time think more carefully about who needs to attend, what should be discussed and how long the meeting should last.

That’s critical because the “average” professional spends about 21 hours per week in meetings, according to the 2021 Productivity Trends Report from reclaimai. “Employees have been beaten down; so much of this rests on the leader fundamentally thinking about meetings differently,” Rogelberg shared during an interview on the Knowledge at Wharton radio show on Sirius XM.  He has several suggestions for how to shift your perspective on meetings.

Too many meetings rehash the same topics week after week more out of habit than with intentional thought about what’s necessary, according to Rogelberg.

“We find leaders engaging in so much agenda rehash,” he says. Many weekly meetings of direct reports might fall into this category. Standing meetings can even pressure participants into digging up information to report on just so they don’t appear to be slacking even if the information is not relevant to others and their input unnecessary.

Instead of set gatherings, consider sending information out on a particular topic and then convening only those who actually need to be there for just 10 or 15 minutes to focus on one issue. We tend to “hold people captive,” Rogelberg says referring to regularly scheduled meetings that happen regardless of need.

People experience a meeting like an interruption, according to Rogelberg’s research. You’re working away getting things done and right in the middle of it you have to stop, shift gears and adhere to someone else’s timing. Understandably, interruptions tend to put people in bad moods (which also leads to less creativity and more rigid thinking).

As a meeting leader, if you assume that people aren’t thrilled to be there, you might work harder to make it worth their while. Like a good party host, welcome them, show appreciation for their time and participation, thank them for coming, introduce folks who don’t know each other and demonstrate enthusiasm for the work.

Use time to your advantage

Parkinson’s Law says that work expands to the time allotted so meetings set for an hour tend to take an hour. If instead you schedule meetings for unexpected amounts of time (say 32 minutes), Rogelberg says it helps people be both physically and mentally present. They feel a certain sense of pressure and remain engaged to get something done and get back to work.

Stop talking so much

He also suggests spending less time talking and more time capturing ideas in other ways. Brainstorming verbally in a meeting, for example, elicits fewer ideas than asking people to write down their ideas first and then share them. Otherwise, people edit themselves, take cues from more senior people or even get bored waiting for a long-winded colleague.

Sharing the spotlight can also help. Ask others to facilitate various parts of the meeting. This gives more junior members greater visibility and the opportunity to practice, transforms people into more active participants and relieves the tedium of hearing from one presenter.

“When the context allows, we can increase engagement by setting up roles in advance,” suggests Executive Coach Mila Trezza writing for The Law Society, an independent body that promotes and supports solicitors in England and Wales. “Planned contributions may be expertise-driven but also be based on generic roles, like being the host of the meeting on rotation.” She also suggests introducing more novel roles, such as someone assigned to act as the challenger of specific arguments or to serve as timekeeper.

Conducting meetings while standing or walking can also cut down on meeting time and boost ideas and creativity. “Standing-up meetings produce the same quality of outcomes as a sitting-down meeting, but in half as much time,” Rogelberg says. Of course, all participants must be willing and able to attend standing or walking meetings, and agree beforehand.

Investing effort up front to plan and host more effective meetings is like reading recipes and planning menus — if you’re going to do something every day, do it with intention, a little flair, and based on expertise that will help ensure your creation will be a good one.