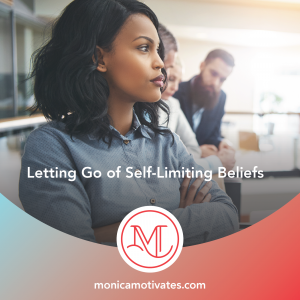 Each of us arrives in the workplace with all the learnings and cultural norms that define our life experience and make us who we are. But not everything you’ve learned to this point will serve you well in building a business or advancing in your career.

You may have internalized a belief that it’s best not to make waves, you’re too young or too old to be taken seriously, you don’t have a head for numbers, you’re not decisive, not a people person or that it’s better to excel at what you know rather than stretch for something new. How might your behaviors and choices change if you replaced limiting beliefs that are holding you back with those that energized and propelled you forward?

Limiting beliefs can be a major stumbling block to achieving your goals because they shrink the vision we have for ourselves and the possibilities we see ahead. They can inhibit you from even trying something new if you have predetermined it is somehow not consistent with who you are. Often, limiting beliefs are based in experiences or messages we received at a very young age that we have let stick rather than questioning them and replacing them with more empowering ideas. Here are a few of the most common limiting personal beliefs that may be holding you back and ideas on how to change them.

Although limiting beliefs can be difficult to let go, every time you notice these self-sabotaging thought patterns and choose more empowering ones, you will gain confidence and resilience on the path to your greatest success and personal satisfaction.