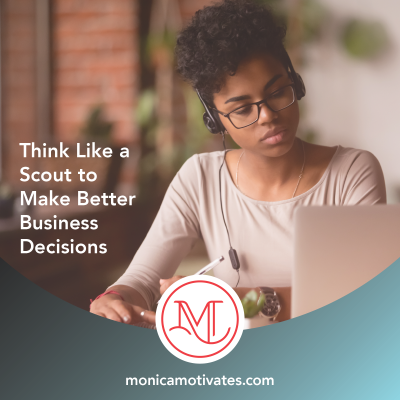 In the heat of battle (and let’s face it, building a business requires besting the competition) you would never consciously delude yourself with inaccurate information. Yet, we do it every day by relying on what psychologists call “motivated reasoning.” Unconscious motivations, desires and fears shape how we interpret information, the conclusions we draw and decisions we make.

When we want something to be true, we search for reasons to accept it, and when we don’t want something to be true, we look for an excuse to reject it. Some ideas feel like allies and we want them to win, and others feel like enemies we want to shoot down, explains Julia Galef, author of the best-selling book The Scout Mindset and host of the Rationally Speaking podcast.

Defending existing beliefs in the face of contradictory evidence is what Galef calls soldier mindset. It can be an especially dangerous approach for a budding business where you must often implement strategies in uncertain terrain. A better approach, Galef says, is to adopt a scout mindset. Scouts focus on ferreting out objective input, even if it’s inconvenient or unpleasant. A scout wants her understanding of herself, her business, her competitors and her world to be as accurate as possible.

Scouts are not pessimists, but they ask tough questions, challenge assumptions and stress-test plans so they can prepare for challenging circumstances rather than simply hoping for the best.

That’s a sharp contrast to many popular business experts who promote the idea that success is only a matter of trying hard enough. Some even advocate ignoring critics and conflicting information so you can single-mindedly pursue your dream. That may help explain why one survey of entrepreneurs found that almost all of them estimated their company’s probability of success to be at least seven out of ten and a third even said ten out of ten.

It can be tempting as an entrepreneur to talk yourself into the idea that success is guaranteed so that you will be more effective in persuading others to believe it too. But some of the world’s most successful entrepreneurs have a much more clear-eyed concept of their risks and chances of hitting it big. They are confident in their ideas and abilities, but also understand that even the best ideas and the most talented entrepreneurs face stiff competition and unpredictable externalities.

Elon Musk put the chances that a craft from his SpaceX venture would ever make it into orbit at just ten percent, Galef shared. He felt Tesla faced similar odds for success. Still, he determined that both efforts were important and valid enough that, with sufficient preparation and ongoing evaluation, they were bets “worth taking.” Similarly, Jeff Bezos told potential investors there was no guarantee Amazon would succeed, but he also provided reasons to see the risk as one worth taking.

Scouts are motivated by having a clear picture of the facts so they can make the most of vetted opportunities. Here’s how to cultivate your inner scout.

Have a plan. “If you’re an entrepreneur, having a plan means being able to make a strong case for what you are going to do to make your business a good bet ― a bet that you feel confident about taking, and that other people can feel confident investing in, even though success isn’t guaranteed,” Galef writes.

Get curious. Instead of dismissing information that contradicts your beliefs or current understanding, get curious about it. “Scouts view anomalies as puzzle pieces,” Galef says. Diving into information that threatens your existing business assumptions can help you avoid pitfalls and identify new opportunities.

Conduct an “outsider” test. Imagine that someone else is looking at the same information and results as you. How do you think they would proceed? The outsider test, Galef explains, can strip the emotion out of a situation and leave you with a more honest guess at how best to solve current challenges.

Calibrate your degree of certainty. Scouts resist the temptation to think in absolutes and learn to quantify their likelihood of being right. Galef’s book includes a 40-question test to help readers practice calibration. It’s not getting the right answer that’s important on this test, but rather your ability to predict how likely it is your answer is right. Building self-awareness around your ability to describe situations honestly is a valuable business skill to keep over-confidence in check.

Learn to “update.” Admitting you’re wrong or have made a mistake is difficult, especially as the owner and boss if you feel you should have all the answers. Scouts welcome new information and use it to draw more accurate conclusions. They talk about updating in response to new evidence. “An update makes something better or more current without implying that its previous form was a failure,” Galef says.

Being intrigued, rather than threatened, by information that runs counter to previous beliefs can help you identify which risks are worth taking, which problems can be fixed, and how likely it is that your judgment is on target.