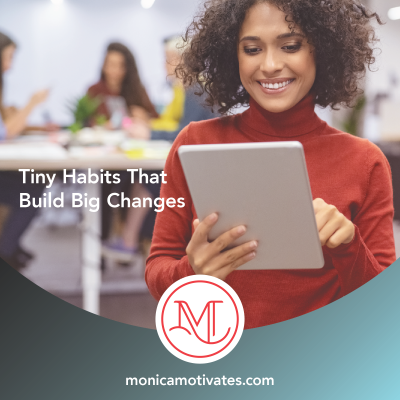 As a business leader, your ability to get yourself to do what you actually want and need to do is pretty much a make-or-break competency. The freedom to call the shots comes with the obligation to take the actions needed to drive success. Even in your personal life, following through on your desire to exercise more, manage stress, eat more healthfully or balance work and home life is critical.

Behavior scientist and founder of Stanford University’s Behavior Design Lab, BJ Fogg, Ph.D., has found through twenty years of research that starting with small changes is far more likely to lead to successful habit creation than attempting a massive overhaul.

In his hugely successful book, Tiny Habits, he explains that much of what we think we know about habit formation is not borne out by the research, including the popular notion that doing something for twenty-one days will wire it in. Ditto for motivation being the key to behavior change. Instead, Fogg says, the issue is one of behavior design, not lack of willpower.

“With the Tiny Habits method, you focus on small actions that you can do in less than thirty seconds,” he writes. “You will quickly wire in new habits, and then they will grow naturally.” By starting really small you can start a new habit right away and have reason to celebrate (another key to success).

Fogg advocates a Behavior Model he has developed over decades working with and researching people attempting to make changes that range from exercising and losing weight to making more sales calls and reading more. His basic model is B=MAP or Behavior happens when Motivation (your desire to do the behavior), Ability (your capacity to do it) and a Prompt (something that cues you to do it) come together at the same time. You can tinker with each element to find a combination that works for you for a specific habit.

Fogg is emphatic that successful habits happen through trial and error. He plots motivation and ability on a graph to show how they play off one another. For example, if your motivation to exercise is really low, you need to make the behavior extremely easy to do at the start. That could literally mean putting on your sneakers. Period. When motivation is high (such as protecting your child), you will perform even the most difficult behaviors.

Fogg also has a hard and fast rule about behavior prompts: no behavior happens without one. “Motivation and ability are continuous variables,” he writes. “You always have some level of motivation and ability for any given behavior. But a prompt is like lightning. It comes and goes.” That’s why one of the best ways to launch a new behavior is to link it to an existing prompt and to stop doing an unwanted behavior is to remove the prompt. If you don’t want to eat cookies, don’t allow them in the house.

Better understand yourself, and others

In addition to exploring and troubleshooting your own behavior, you can use Fogg’s behavior model to understand other people’s behavior and help to influence it. He cites an example of employees arriving late for a weekly staff meeting. Start with these steps and move through each one successively.

Small changes that change everything

Fogg’s research shows that creating new habits is about starting really small, celebrating little victories, learning from “failures,” and experimenting with behavior prompts, ability and motivation until you find a formula that works for you. “Habits may be the smallest units of transformation, but they’re also the most fundamental,” he says. “They are the first concentric circles of change that will spiral out.”